Hydrangeas in Shadow and Light - Different Strokes from Different Folks

I started working on a commission today and needed a break so I thought I'd do a quick study of Karin Jurick's challenge this week in her blog Different Strokes from Different Folks.

It didn't turn out too bad - it would make a wonderful Christmas gift for someone special. 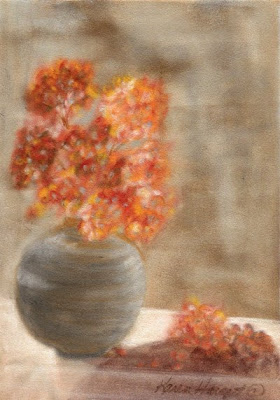 Hydrangeas in Shadow and Light
5" x 7" (12.7cm x 17.8cm)
Pastel on Velour
$100 plus $10 shipping and handling in the US
E-mail me for International shipping rates or other inquiries.
To see more of my work please visit my website Karen Hargett Fine Art
Posted by Karen Hargett at 9:21 PM 11 comments: Links to this post

Heavenly Father, on Thanksgiving Day
We bow our hearts to You and pray.

We give You thanks for all You've done
Especially for the gift of Jesus, Your Son.

For beauty in nature, Your glory we see
For joy and health, friends and family,

For daily provision, Your mercy and care
These are the blessings You graciously share.

So today we offer this response of praise
With a promise to follow You all of our days.


Happy Thanksgiving everyone! God Bless.
Posted by Karen Hargett at 12:01 AM 2 comments: Links to this post 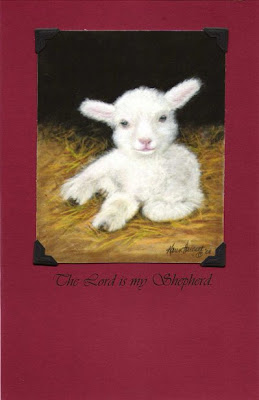 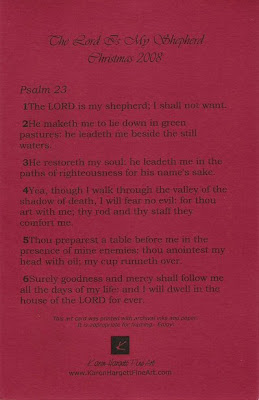 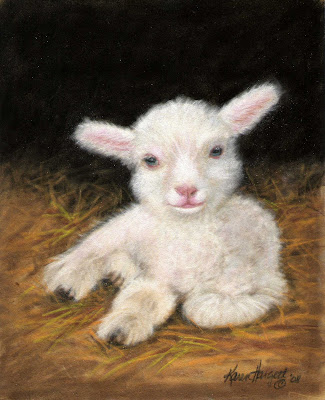 To see more of my work please visit my website Karen Hargett Fine Art
Posted by Karen Hargett at 10:43 PM 20 comments: Links to this post

The Blue Door is Back - Version 3

I just couldn't leave well enough alone - OK. This painting has been bugging me - a lot! After making the alterations in the second version it looked too plain to me - as if it needed something. So logically. . . I added chickens.

The second version doesn't exist any more - but I have chickens now and I think I like it better. The chickens aren't quite as red as they appear here but they are Rhode Island Reds. 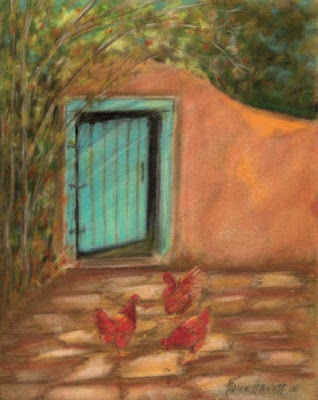 I promise I won't be adding any more to this - the tooth of the paper is almost full and probably won't take much more pastel. I really am finished this time.

Posted by Karen Hargett at 9:10 PM 4 comments: Links to this post

After some critiques on the Blue Door in another forum I took the piece I had done and redid it somewhat. The Blue Door showing here no longer exists. I took out the fountain, the bird, the rock border, the grassy area and added some shadows and lights. I hope it works because I'm done! 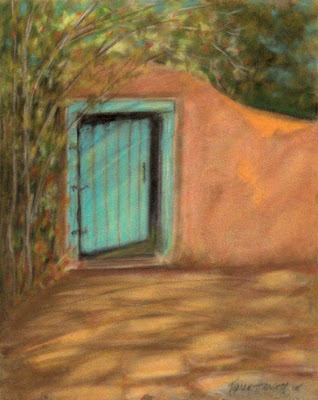 Posted by Karen Hargett at 8:45 PM 2 comments: Links to this post

City Walker aka Upside Down Walker

This is another of Karin Jurick's challenges on Different Strokes From Different Folks. We were given a photo reference with instructions to paint the painting upside down - well at least 90% of it anyway. So that is what I did! I didn't stand on my head or anything like that - just turned my reference upside down and painted. I did sketch the woman out upside down before blocking in the color color upside down but it was quite fun. I found I wasn't too concerned with what I was painting - just the shape.
Actually in the past, I've turned my graphite drawings upside down from time to time to see if I had gotten all the details or to see where I was off but I've never painted something from the start upside down.
I'm fairly pleased with the way it turned out except for the face. My velour board is only 5"x7" so the face is pretty small - couldn't get the nose and shape of the face with my fat pastel sticks so guess what - a gust of wind blew her hair in her face! I also changed the shadow a bit because in the reference photo it looked like she might have x-ray vision the with way the light appeared to be coming from her glasses and it creeped me out so I moved it. It's great to be an artist! 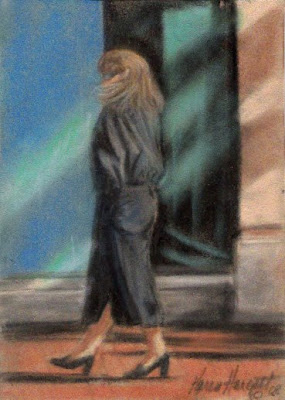 These challenges of Karin's are just that for me - a challenge. They are usually not subjects that I would paint but I'm learning something with each one and enjoying doing something different. Thanks Karin!

Posted by Karen Hargett at 9:35 PM 11 comments: Links to this post

This is the results of a challenge on Wet Canvas by Jo Castillo. Jo had come out to the art club I belong to, Artists of the South Corridor, and did a pastel demo for us. She is a really neat lady, talented too. I started following her blog and saw beautiful photo she had posted of a blue door for the southwest challenge on Wet Canvas. I had to do it. So here it is.

I'm not sure I'm finished but wanted to post it. I'll put a price on it in a day or two when I've decided I'm through painting. 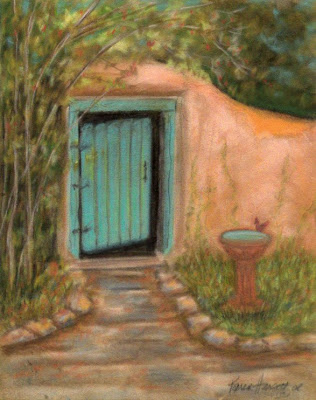 To see more of my work please visit my website Karen Hargett Fine Art
Posted by Karen Hargett at 8:49 PM No comments: Links to this post

If you are in the Austin area, please be sure to stop by the Real Gallery on 2824 Real Street in Austin. I will be participating in the Multicultural Artists Partnership Holiday Exhibition. All work will be for sale.

It will be a great way to start your holiday shopping, meet some local artists and enjoy some live jazz music.
Posted by Karen Hargett at 6:35 PM 4 comments: Links to this post