2008 is here! It's hard to believe. 2007 was a good year and I'm looking forward to great things happening in 2008 and sharing them with you along the way.
I haven't been drawing much over the holidays. Sometimes I find it is a little hard to face that blank piece of paper after such a long break. Even though my fingers itched to get started, that first drawing makes me hold my breath sometimes and this was no exception.
I love drawing eyes so I thought I'd start off with a cat with large green eyes - just something small about 8"x10" and nothing too detailed - just a nice head study. The more I drew on it the more something looked off. I'm still not sure what it was. As you may know, after a certain point you can't get any more pastel on the paper and I found myself getting there fast. However, I wasn't going to give up on this first drawing of '08 and decided to get a little dramatic!
It didn't turn out like I had planned - but I salvaged it and plan on matting and framing it. It was a good lesson for the New Year too. If I had given up after it not going exactly like I had wanted I'd have nothing to show for it and my confidence would have been a little shaken. Instead, I kept at it and probably ended up with a drawing with more impact than I had planned AND now I'm looking forward to starting on my next drawing. 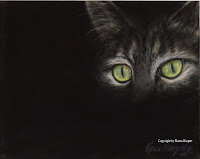