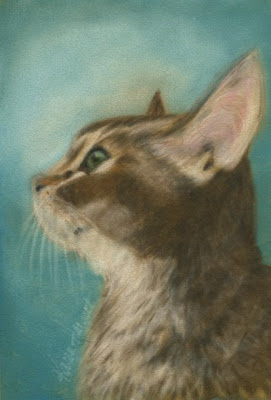 I have a friend at work, Genevieve, who had to have her cat put down today.
Genevieve is one of those special people who volunteers her time and money to take care of animals. She is a true animal advocate. She belongs to a group who set live traps for Ferrel cats to have them neutered or spay to keep the cat population down. Once they are stable the cats are returned to their "home" wherever that is. She volunteers her time in other ways to with other organizations.
Recently she had taken in a neighborhood cat, who I think knew to come to her. She hadn't seen this cat for a while and then out of nowhere he shows up. He was in pretty bad shape. He had been abandoned and left to die by his owner. Genevieve, fed it, took it to the vet for treatment, and then made its last days comfortable at her house. When it was time she had him put down, had him cremated, and then the spread his ashes in her flowerbed where he used to spend some of his time.
This time it was her cat, Zoe. Zoe has been ill for some time now and it has been a roller coaster for Genevieve, as you can imagine. She sent me a picture from her cell phone that she had taken of Zoe today - it wasn't very clear but this is the pastel that I've done of Zoe to take to Genevieve tomorrow. I know it will make her cry but I think it will comfort her too.
Posted by Karen Hargett at 8:20 PM

Karen, How wonderfully thoughtful of you. Your friend will be saddened at first...but the portrait of Zoe will bring her much comfort in the future.

Such a lovely gift.

Karen what a wonderful gift. Yes there will be tears yet lots of comfort.

Thanks Marsha and Toni. She did appreciate it very much.

I'm going to do another one for her though - when I looked at it this morning - I realized her ears are way too big! I was using the photo from her camera but didn't make adjustments as I normally do for being too close to a subject.

Genevieve liked it though because it is the same as on her camera. She has a really nice picture of Zoe that I'll do and post later.

Poor Zoe she looks like she is flying away.

How beautiful Zoe looks. As if she's already in heaven looking to see where she'll start to frolic in paradise. Wonderful gesture of kindness from a wonderful artist and friend.

Your friend will remember her this way, so lovely. Best Regards from Peru :)

You are the best! Thanks for the picture and for writing about me! Love you!

Your story made me cry - what a great gift you've made for a special person. That will be a present she'll love for many years.

How very sweet of you to give her such a wonderful gift. I'm sure this will comfort her a lot.

What a fine gift for Genevieve! It was wonderful for you to take the time to create your own Zoe to give and comfort your friend. I also have a rescue project going at my home. We have nine dogs that were abandoned to the streets...it's so difficult because they get pregnant and then they get dumped. It's hard but we can't take in anymore for now. There is a problem with animal control in Puerto Rico...that's where Oasis blog is (and I'm) based. I do what I can for the animals. Right now, we have two dogs who are sick...one is extreemly ill. We lost three cats this past year. One, Tierra, we had for 15 years and the other, Playful, 14...and our spoiled baby black cat, Mione, was only 4. Your friend had a lot of courage to let her dear Zoe go. <3

Oh man - I thought I had already posted my comments and they aren't here. Anyway

Sheila thanks so much for your kind words - always good to hear from you.

Carolina thank you too. Are you living in Lima? I'm just wondering if you are the Carolina I recently sent a print to.

Hey you Thinktink - you are more than welcome. I promise the next portrait will be better ;-) Love you too!

Hi Regina - thank you. Stories like this always make me cry so don't feel alone.

Joasdi - thank you!I think it did.

Cynthia thanks for your comments too. It sounds like you have your hands full. This world needs more people like you and Genevieve.

Karen, This is so sweet of you, she will love it. What a wonderful lady.

Yes Karen, that's me! I love your blog and your art, what else can I say, I'm so happy to share these little ciber-moments, it's so especial... :)

Thanks Barb! I know you have done the exact same thing and knows what it means to both parties involved.

Carolina! How neat that it is YOU - as silly as that sounds ;-) Thank you so much!

Karen - you are a true angel! What a lovely thoughtful gift for someone grieving the loss of their pet. Very nice cat pastel.

Hey Pattie - you are too kind! I was hoping to get the other one done this last week but. . .didn't do it. Maybe this week.

B beautiful painting and a precious gift, Karen.
As a pet owner, I know how hard it is to let go.