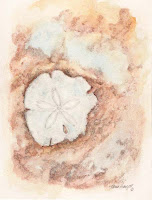 How many of us have picked up sand dollars when we were at the beach when we were hunting for sea shells? The sand dollar used as a reference in this drawing was my grandmothers. I have three very large beautiful sand dollars of hers. They are all perfectly formed and unbroken and have been with me for years.

I used Fabriano 300 lb. cold press watercolor paper and graphite pencils along with watercolor pencils. I used the watercolor pencils first just placing color where I wanted it and then taking a damp brush and brushing it over the paper making a wash of transparent color. When that dried I began with my graphite pencils and drew in the sand dollar as I imagined it laying in the sand, partially buried, waiting for me to find it. I actually just held the sand dollar in my hand while I drew it but the memories of finding them on the beach helped when describing this piece on the paper. The texture of paper lent itself perfectly when doing the sand. Occasionally I’d take a damp brush and touch it to the water color pencil on the paper to achieve the watery look I was going for.
The original and limited editions prints are available of the Sand Dollar on my website in the coastal life gallery - check it out at SEASCAPES & COASTAL LIFE by KAREN HARGETT
Posted by Karen Hargett at 5:52 PM