Well the show this weekend is over - not a total success but not a failure either since I made my entry fee plus some. This, however, was the first time I haven't sold an original at a show. That was disappointing but you never know what may come out of a show once it is over either so I refuse to think of it as a failure.
I did get to see some artists that I haven't seen in a while - that is always nice. I made some new friends too - another plus.
Another great thing about this show was I got to see my new screens and covers in action! It was stressful getting everything done (and redone) in time. If you remember, I had made screen covers. The only problem when my sister came over so we could "practice" they were too hard for us to manage which meant the side seams had to be ripped out, the edges re-sewn and ties made to tie the covers on to the screens. I just didn't have the time what with working and still printing prints and a day and a half to the show!
My sister and mom came to the rescue though and worked very hard and did a great job on getting them finished by the day of the show. My brother needs to be commended too - he stays extremely busy but managed to build my remaining screens just in time. Whew!
My sister and her husband helped me set up and take down, not to mention transport the screens and a few odds and ends in their truck. Thank God for family - don't know what I'd do without them!
When I look at these pictures it is hard to imagine how I managed with only 4 screens at other shows. 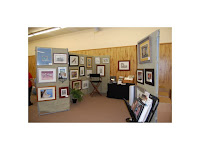 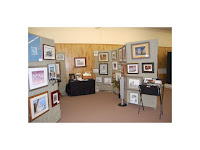 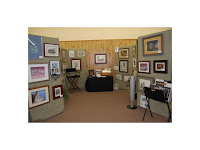 Since this show was indoors I didn't have to use my tent and was able to take advantage of the space provided. Now I have a better idea of what to do at my next show - in Kerrville in May!

Posted by Karen Hargett at 8:35 PM

Karen,
Good to have you back, and glad you had a "good" show. I was getting concerned, you usually post more often than this. Glad all is well and you were just busy getting ready for your show.

Your set up looks nice and well thought out. I start my shows in June this year...opting out of two "all original shows that I usually do in May". Unlike you, my main sales at the shows I do are prints.

With the economy the way it is I don't have the optimism that I usually have at the beginning of a season.

I'm glad you covered your expenses...when we can do that it's never a loss. I just consider those shows part of my "advertising" budget!

Thanks Marsha,
I've need to get posting again now that things have settled down at home for a little while.

You know no matter how well thought out my display is I end up changing it. One artist told my sister at this last show that the only thing that has stayed the same when he sets up his display is his hat. I think there is a lot of truth in that for most of us.

The economy is scary. My show schedule isn't as full as yours but I still worry. Good positive thinking - advertising budget - I like that! Good luck with your shows.