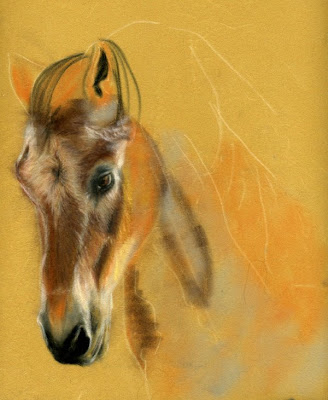 It's been a while since I've done a WIP (work in progress). I think that is always a little intimidating because you really want it to turn out good if you are going to post it in stages and there are some really ugly stages in pastels. At any rate I decided to share it with you - ugly and all.

This pastel I'm working on is of my horse Billy Bob. He will be 21 in April. The photo that I'm using as a reference was taken last year. On this particular day he was acting really studly (he's a gelding), arching his neck, bucking, running, blowing wind through his nose and in general putting on a great show for me.

I've had Billy Bob since he was four, he is trained as a reining horse and one of the true loves of my life.

I started with the eye. I always start with the eyes otherwise it creeps me out. I'm kind working around his face in no really particular order. I hope to do some more work on this tomorrow evening and then over the weekend. I haven't really decided on a background yet. I need to decide rather quickly though because it is a good idea to get that in before going too far - so I will be thinking about that tonight and tomorrow before starting again on it.
Posted by Karen Hargett at 8:49 PM

Karen that is not ugly at all. You make me want to dig into my pastels again. Looking forward to seeing the finished piece.

Hey Toni - Thanks! I guess you are right - it's not too ugly right now. I do hope you do get your pastels out - I'd love to see that!

Sometimes you can just TELL that a piece is going to be absolutely beautiful - and this is one of those pieces! I find that when artists love the subject matter, it shines through their work... it is quite evident that your horse is in that category. I can't wait to see this one finished!!! :-)

Hi Joanne - thanks so much! I hope it turns out like I want it too. Yes I absolutely love my horse - no doubt about it - I'm glad it shows through. BTW thanks for visiting my blog. I just took a peek at yours - very nice! I'll be going back.

Hi, Karen. Beautiful start on this pastel! Looks like a good choice of paper color. What you have done so far looks great. Thanks for a WIP.

Hey Dean - thank you! I can't really take credit for the choice of color totally to go with the painting because it is usually the only color I use. My choices at the art store are this color and a grey. I've never left the background without covering it up with pastel. As much as I love working on velour I think it would look strange without pastel on it. BUT since you think the color looks good I thought I might use some of the same pastel color in the background ;-)

I can't WAIT to see the finish on this painting... although it's stunning just as it is! That is a great choice of background for this face, Karen. Wow.

Hey Susan - good to see you. Thanks - I hope you like the background now as well since I added pastel to it. I'm enjoying working on and I'm trying to take my time. Hopefully the finished product will be worth it.