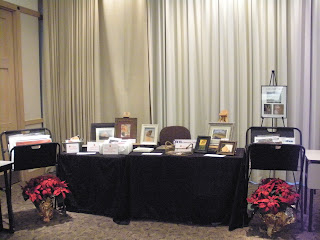 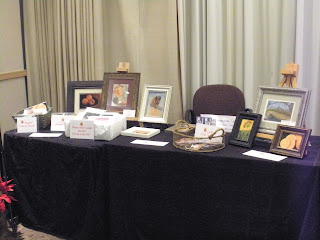 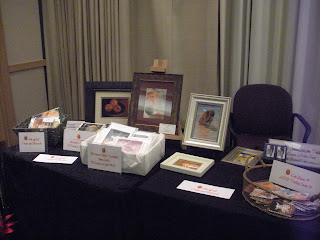 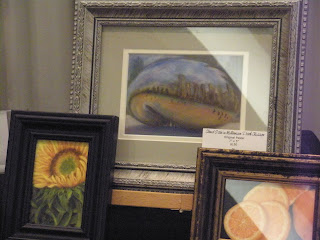 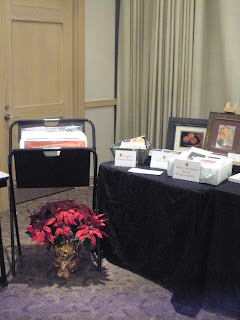 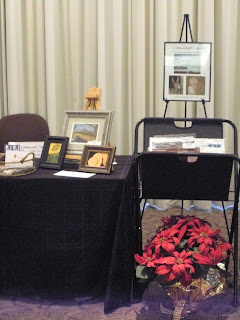 The TMA Holiday Shopping Extravaganza turned out well. The great thing about it was it was at work, I was inside and didn't have to worry about cold or wet weather and lunch was provided. You can't beat that with a stick!
I didn't have a lot to set up, as compared to a full fledged, show so it didn't take long to set up or take down and that is always nice. I have two crates under the tables that I pack my extra prints and other things in. Even though it makes extra stuff to carry, it really is nice to have those extra prints to replace what has sold.
People were shopping for small items but I sold several prints, lots of notecards. ACEO cards and some key chains I had made up at the last minute. I had several to ask about commissions so hopefully something will happen there.
I did something this time that I don't normally do and that was offer a discount. People seemed to like the idea they were saving money. I also gave the option to those who were having a hard time deciding if they wanted to spend any money on a print or original to go to my website within the week and place their order and I'd honor the discount.
We had more vendors there than before - but as far as artists go it was just me and one other artist and one photographer I believe - the others were more crafty type, hand made things, food, or jewelry. Traffic was steady but people were careful with their purchases. I certainly feel blessed I did as well as I did.
Thank you to those who came out and especially to those of you who purchased a piece of my art. You are appreciated.
Colossians 3:15 (New International Version)
Let the peace of Christ rule in your hearts, since as members of one body you were called to peace. And be thankful.
Posted by Karen Hargett at 3:12 PM

Hi Karen,
I'm so glad for you and how well things went at the shopping. It couldn't have been different :)
Best regards,
Carolina