Back in 1993 I drew this picture of a horse with a reflection of a reiner in its eye. Reining is a style of western horseback riding where a horse is ridden through various patterns at a lope and gallop. The patterns include magnificent sliding stops and fast spins. All of this is done with no resistance from the horse and should look effortless. It is often called the Western Dressage.

At the time, I was training with Gaetan Gauthier, a very talented Canadian horse trainer, who spoke very little English. He knew a horse’s mind, could think like a horse and with broken English taught me how to rein and train my horse Billy Bob. It’s a rare talent to be able to communicate both with horses and humans alike.

It was a fabulous time in my life. I learned a lot about horses and even more about myself. After one particularly hard day of training and finally getting it right and feeling so good about myself I knew I wanted to do something special for Gaetan. His birthday was coming up soon and so I decided to try and draw a horse for him. A special horse, to communicate how I felt about him as a trainer, how much I admired him as a person, and to communicate that special relationship he has with horses to everyone else. He was always “tuned into” the horse he was riding. At times you didn’t know where the horse left off and Gaetan began – it was awesome to watch that connection of minds.

Before that I really hadn’t drawn anything like this – nothing this “detailed” and nothing this inspired. I sat down one afternoon and began to draw. Now mind you, I was very unsure as to how it would turn out but knew in my mind what I wanted to draw – it was churning inside me. It took me a couple of hours and when I sat back to look at the results I was so pleased with it. Then I wanted to try to see if I could do it again. I did – much to my surprise! I thought it might be a fluke. This is one of three that I drew that afternoon. It was as if it bubbled up from my very core. I couldn’t draw fast enough. I was almost as tired from drawing as I had been taking a riding lesson from Gaetan.

I was so excited about the drawing and couldn’t wait to give Gaetan his. I will never forget that day. We were all at a restaurant to celebrate his birthday and I gave him the drawing, matted and framed. When he unwrapped the paper he just stared at it – not saying anything at all for several minutes. I was then getting very nervous. I thought he hated it or he didn’t understand what I was trying to say. Then he looked up at me and said very quietly “This is me isn’t it? This is me - I am the horse.” I almost cried.

Unless you have read my bio on my website you are probably wondering why in the world I would post this. Well, that was the start of all of this that I am doing now. The drawing, I call “The Inspiration,” isn’t perfect - in fact there is a lot wrong with it. I know I have improved since then but it is still very special to me. I just want to encourage you if you are just beginning to stick with it - keep drawing.
Since telling this story again has inspired me I may have to do something similar in the very near future. Maybe using Billy Bob as my model this time. Yep, he is still with me, retired from reining though. He turned 20 this month! Happy Birthday Billy Bob!

This drawing is on an 8” x10” cold press Crescent board. I used one mechanical pencil that I had bought at the grocery store – probably a 2B – and a kneaded eraser.

Here is a closeup of the horse's eye with the reflection of the reiner. 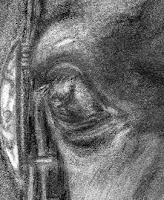 Posted by Karen Hargett at 8:49 PM