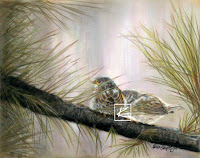 I've finished the Fledglings tonight! At least I think so. As usual I'll let it sit for a day or two before calling it finished. I really like how these little sparrows have turned out - very sweet, soft and a little anxious to see what is out in the world.
Tonight I worked on lights and darks mainly on the tree branch and pine needles. I wanted more depth than I had last night so that means putting light against dark and warm against cool. Pine needles can be rather shiny and I've tried to give them a little light reflecting off of them to describe the shine. I did go in and darken the entire left side so it would feel more in shadow than it was in my early post. The other thing I worked on was the bark on the tree - more darks were added for shadows to describe the roughness.
I'm anxious to get this one matted and framed - I think it is going to look really nice.
If you are interested in purchasing The Fledglings or any of my other drawings please let me know. You can go to my website at http://www.karenhargettfineart.com/.
Posted by Karen Hargett at 9:35 PM

Just beautiful Karen...you just keep getting better and better. You can "feel" the damp atmosphere and the softness of the feathers on the birds. Well Done!

Thanks so much Marsha! This was such a sweet picture and with spring in the air it seemed a natural choice.